ON DISC
A wisecracking mercenary gets experimented on and becomes immortal but ugly, and sets out to track down the man who ruined his looks.

"When They See Us" Shows the Horrors of Injustice 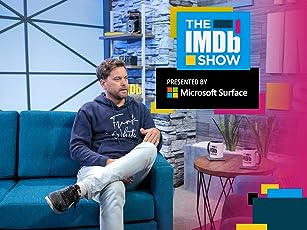 "When They See Us" star Joshua Jackson discusses why the new Netflix mini-series is so impactful, and how his character became a passionate advocate for justice.

Search for "Deadpool" on Amazon.com

How the 'Deadpool 2' Stars Would Audition for X-Force

Foul-mouthed mutant mercenary Wade Wilson (AKA. Deadpool), brings together a team of fellow mutant rogues to protect a young boy with supernatural abilities from the brutal, time-traveling cyborg, Cable.

The Guardians struggle to keep together as a team while dealing with their personal family issues, notably Star-Lord's encounter with his father the ambitious celestial being Ego.

While on a journey of physical and spiritual healing, a brilliant neurosurgeon is drawn into the world of the mystic arts.

Armed with a super-suit with the astonishing ability to shrink in scale but increase in strength, cat burglar Scott Lang must embrace his inner hero and help his mentor, Dr. Hank Pym, plan and pull off a heist that will save the world.

Political involvement in the Avengers' affairs causes a rift between Captain America and Iron Man.

After being held captive in an Afghan cave, billionaire engineer Tony Stark creates a unique weaponized suit of armor to fight evil.

Earth's mightiest heroes must come together and learn to fight as a team if they are going to stop the mischievous Loki and his alien army from enslaving humanity.

When Tony Stark and Bruce Banner try to jump-start a dormant peacekeeping program called Ultron, things go horribly wrong and it's up to Earth's mightiest heroes to stop the villainous Ultron from enacting his terrible plan.

As Steve Rogers struggles to embrace his role in the modern world, he teams up with a fellow Avenger and S.H.I.E.L.D agent, Black Widow, to battle a new threat from history: an assassin known as the Winter Soldier.

Steve Rogers, a rejected military soldier transforms into Captain America after taking a dose of a "Super-Soldier serum". But being Captain America comes at a price as he attempts to take down a war monger and a terrorist organization.

The powerful but arrogant god Thor (Chris Hemsworth) is cast out of Asgard to live amongst humans in Midgard (Earth), where he soon becomes one of their finest defenders.

This is the origin story of former Special Forces operative turned mercenary Wade Wilson, who after being subjected to a rogue experiment that leaves him with accelerated healing powers, adopts the alter ego Deadpool. Armed with his new abilities and a dark, twisted sense of humor, Deadpool hunts down the man who nearly destroyed his life. Written by 20th Century Fox

Negasonic Teenage Warhead's appearance is significant in debut in three ways: it is the first-ever live action debut of an original character created by writer Grant Morrison. it is the debut of the actual character in a live-action movie it is the film debut of Brianna Hildebrand. See more »

When he is going through all of the potential plans from A to Z, Deadpool pronounces Z as "Zee", not "Zed" like a Canadian would say. See more »

[first lines]
Deadpool: Kinda lonesome back here.
[wedges himself through the Plexiglas opening between the back seat and the front]
Deadpool: Yeah, little help.
See more »

Rob Liefeld and Fabian Nicieza are credited as "Special Thanks (with tongue)". See more »

The theatrical and DVD releases were censored by the CBFC in India to secure an A rating (restricted to adults i.e. 18+): The general censorship of violence/sex/swearing totaled 3 minutes and 53 seconds. The anti-smoking additions were voluntary and totaled exactly 2 minutes. The Indian Blu-ray release is uncut (despite also showing an A certificate on the back cover). See more »

Q: Why is Colossus different in this film than the previous movies?
Q: Where is Stan Lee's cameo?
Q: How is Wade Wilson the same age in the 2010s as he was in the 1970s?
See more »

I really, really liked Deadpool. And you know what? I didn't expect to. Seriously, I was never a fan of the character (in the sense that I hardly knew anything about him) and the humor as well as the violence seemed forced and overdone in the trailers. Still, I remained interested in the film, I just never expected it to actually be good - until the reviews arrived. After most critics unexpectedly showered this newest superhero movie with praise, I went in cautiously optimistic (but still fully prepared to hate the film).

The first thing I noticed was how inventive the storytelling is. The film throws you into the action from the first moment (literally: the very first moment) and then it goes back and forth in brilliant and unexpected ways to slowly unspool the story of this insane - but oddly charming - antihero. Flashbacks and fast-forwards can be annoying as hell, but when done right, they can help render even a somewhat simple story fresh and exciting. And that's exactly how Deadpool felt to me right from the start: like a fresh (if somewhat dirty) jolt of energy.

The action itself is beautifully designed, employing playful visuals and using pretty much every camera technique available; it never feels repetitive and the pacing is close to perfection. But, and that was probably the key to me liking the film so much, there's a beating heart underneath all the action and carnage, and that has a lot to do with how brilliantly Ryan Reynolds portrays the character and the great chemistry he has with co-star Morena Baccarin. What came as a complete surprise to me was how unabashedly romantic Deadpool is. The love story in this film is probably the most sincere I've ever seen in a superhero movie and it gives the film the strong emotional core which so many of these movies lack.

The humor, which I initially feared would just be non-stop juvenile wisecracks and soon become distracting, also works surprisingly well. Not every line or every joke lands - but that's the beauty of this character: they don't really need to. Deadpool can't help himself; as long as he's able to breathe he'll crack wise and make fun of himself and those around him. It's a clinical condition; he's not a stand-up comedian whose jokes need to land: he's a madman (albeit a very entertaining one) and the comedy in his case is born out of tragedy.

Despite all my praise, it's not a perfect film. The villain in this revenge tale could be more memorable and the story itself is a bit too derivative to really do its highly unconventional protagonist (he insists he's not a hero) justice: but it's a damn good first entry in a franchise that will hopefully explore the character and his world to a much larger extent in the sequel(s). And it's actually a very important film for another reason. If Deadpool is a financial success - which at this point is already clear it will be - this could play a vital role in how studios henceforth view the financial prospects of R-rated superhero films, and we'll hopefully see more of them in the future.

Many people might feel different - and I respect their opinion - but I've grown tired of the entirely bloodless CGI overkill in all those 200 million productions where even the most terrible villains talk like Mormon schoolgirls. I mean: there's a gigantic audience out there that is over the age of 18, loves to read comic books and can absolutely handle real-world language, real-world sex and real-world violence in superhero movies. This genre is so diverse; it's ridiculous to believe just because comic books have pictures in them all film adaptations - regardless of the material - must automatically be made for kids in order to be successful.

As it is, I think Deadpool - a dirty, funny, sexy and violent film which is decidedly NOT for kids - just proved my point perfectly. 8 stars out of 10.